Before you start applying Dermalize Protective Film make sure to wash your hands and put on clean surgical gloves. Measure the tattoo and cut pieces off the roll in sizes that you are comfortable to work with.

Start by cleaning and drying the tattoo and surrounding skin. Apply a very thin layer of a non-mineral oil ointment on the tattoo. We recommend Dermalize Velvet Cream as an ointment which works very efficiently with our protective film.

The first piece of Dermalize Protective Tattoo Film can be replaced after 3/4 hours, the exact time will depend on the amount of fluids that the wound exudes: this will vary from person to person.

In most cases people choose to wear the first patch of Dermalize Protective Film for the first 24 hours, although we recommend to change it whenever it gets dirty, too loose or full of liquids.

When removing the film, make sure to carefully wash the area with suggested Dermalize Soft Wash and water and gently dry the tattoo.

Apply a thin layer of Dermalize Velvet Creamon the tattoo to ensure a moist healing under the Dermalize bandage. This will also make it easier to remove it later on.

On the second day, repeat the operation at least twice during the day.

From the third day any further application of Dermalize Protective Film can be kept on for a variable amount of time, depending on the client’s need, changing it at least once within 24 hours until the tattoo is completely healed. The total suggested use of Dermalize, covering all applications, is between 6 and 7 days. At the end of the healing process, make sure to hydrate the skin with Dermalize Velvet Cream or any moisturizer of your preference.

N.B. If Dermalize Protective Film is hard to pull off the skin, simply let some warm water run under the tattoo film, so that the glue becomes tender and removal of the film is easier. You may also use Dermalize Velvet Cream to rub under the film with clean fingers to in order to remove the glue.

– To facilitate the removal of the film, it is advisable to do it under the shower after letting some water run through it.
– Lift a corner of the film and pull it downwards, towards the center of the tattoo until removal is complete.
– Wash the tattoo with soap and water, gently dry it and let it breathe for some minutes re-apply dermalize as usual. 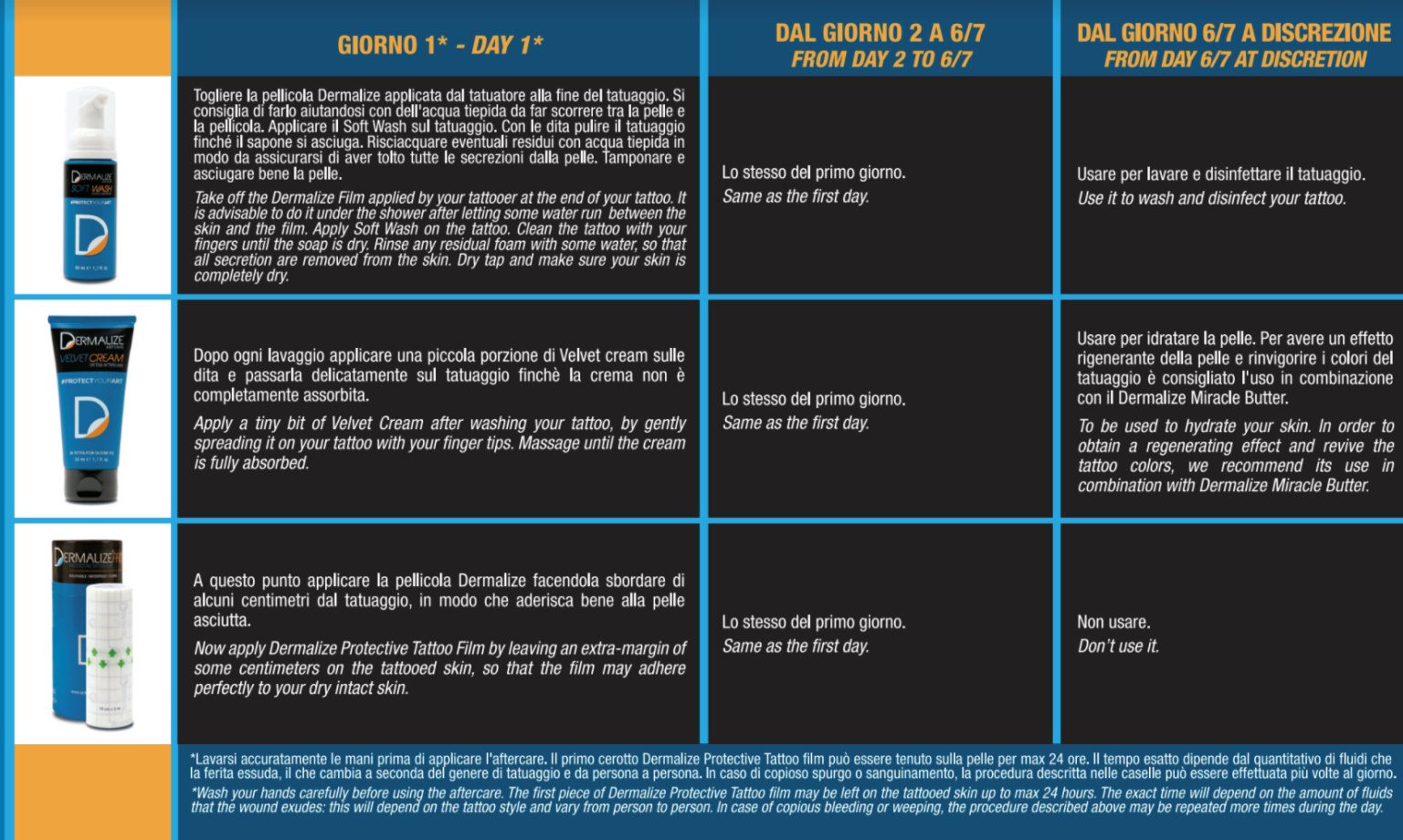